Recently, the Complaint Centre has been publishing material made and/or spread by high-ranked (former) Lyoness representatives, such as 'Dr.' Rik Wahlrab, highest-ranked Lyoness member in the USA and Mr Craig Wotton, former professional golf player and former managing director of Lyoness Australia.

At first glance, all Lyoness propaganda we have found seems identical, yet when subjected to a closer examination, some differences surface. The most prominent one is that most Lyoness propagandists speak of 'Network Marketing' or 'MLM' when describing the 'business model' of Lyoness, yet the highest-ranked member in the USA, Wahlrab, of whom we think it's fair to expect that he's acquainted with the 'business model', refutes the idea that Lyoness has anything to do with 'MLM' and/or 'Network Marketing'.

In fact, Mr Wahlrab and his 'team' have been spreading propaganda videos and other documents amongst their downline in which they explicitly state that and why Lyoness is absolutely no 'MLM' or 'Network Marketing' company. Here are the arguments they provide for this statement: 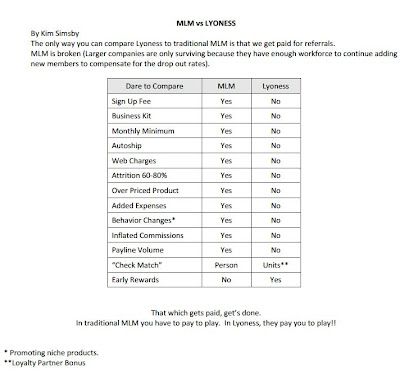 The video in which Mr Simsby explains this in further detail, as well as more propaganda and instructions spread amongst American Lyoness members, can be found here:

The just of it all is that Lyoness has at least 13 major advantages over 'MLM' and 'Network Marketing' systems, which, according to Simsby, are 'broken' and 'are only surviving because they have enough workforce to continue adding new members to compensate for the drop out rates'.

While none of that surprises us (given the reputation of 'companies' operating 'MLM' systems) it is quite awkward - to say the least - that a 'company' that claims that its global expansion thrives on the mere concept of replicability, has to sell its 'excellent, unmatched shopping community' under different names and in different disguises in the different countries it operates in.

This is a video spread amongst Lyoness members in other countries than the USA:


Additionally, in all the propaganda material we found and published, as well as in our conversations with non-American Lyoness members, Lyoness is referred to as being 'MLM' or 'Network Marketing'. Some of the propagators have even spread videos detailing what 'Network Marketing' is, why it is the way to 'financial freedom' and why Lyoness is a perfect example of this system. Some of them have instead coined the term 'recommendation marketing' to refer to Lyoness, but according to them, that is 'a distinction without a difference' - used to move the attention of the audience away from the negativity circulation on the Internet about 'Network Marketing'. As regular readers of this Blog may remember, Lyoness members are generally recommended urged to avoid mentioning (next to the term 'Lyoness') 'Network Marketing' or 'MLM' in their contact with new prospects, until a member of the upline is present.

At this point, some of the readers of this Blog may be interested to learn whether we think Lyoness is 'MLM'/'Network Marketing' or not. Our answer is that it does absolutely not matter what we call Lyoness. Lyoness, its instigators and core-adherents have been - and are - operating a pyramid scheme, with related Ponzi schemes and other (advance fee) frauds.

We also know that Lyoness propagators have trained their followers to lie and deceive, and to tailor the lies and deception so that it fits your target audience. This process of tailoring can take place on the level of an individual prospect, but can also be expended to a wider audience, like for instance an entire country or continent.

Except for a some specifically-targeted subgroups, for instance comprising new citizens, everyone in the USA seems to be pretty familiar and fed up with the system sold as 'MLM' or 'Network Marketing', whereas the rest of the world is less experienced in this area. Thus, except for sheltering unprepared prospects from these terms, in the USA, Lyoness has made an extreme effort to avoid association with these terms, even within the organisation and the propaganda material intended for meticulously-brainwashed adherents.

It should be noted that no matter how a fraud is named, disguised or dissimulated - it remains a fraud at any point.