On the Blog called 'BehindMLM', Mr Wotton contributes to the discussion about Lyoness that currently takes place there, by adding a quote from his own website about 'Network Marketing' (or 'MLM') and that - although the concept is 'tremendously successful' - companies operating in this line of business should be subject to tougher regulations, in particular concerning the enforcement of promised and deserved commission pay-outs (if there are any to begin with) and the fair treatment of big earners and skeptics within the organisation - instead of banning them from corporate events and meetings.

It is particularly interesting to see that like his former colleague Bernhard Wagner, Wotton does not seem to bother for a second about that the concept of what he has been enrolled in and has actively perpetuated and promoted around the globe, may be flawed and has caused numerous victims. No, instead, Mr Wotton is angry that he, apparently, has not received the commissions he was promised, which he thought to have earned fairly by enrolling new members into the scheme.

A fair question is whether Mr Wotton was aware of what he was getting people in to. Of course, one could argue that if he did not, he could have been a little more careful and reluctant in recruiting new members. The same goes, without a doubt for Mr Wagner, who has been a business partner of Hubert Freidl from the very start of his 'successful' career - when they found the company Freidl & Wagner together, and consequently could have known how Freidl operates. Also, he could have seen that Freidl has a tendency to get into a fight with his partners in the middle of another 'successful business venture'. During the GTS (Erin Trade) period, Freidl had a dispute with Roland Bernsteiner over a considerable amount of money; when operating Galvagin, Freidl and his main partner Helmut Rücker blamed each other for the demise of the company. Apparently, now it was Wagner's turn.

Like Wagner, Wotton has a history with being involved in scams - regardless of whether it was as a 'victim' or as an 'instigator'. In fact, Mr Wotton was - prior to his involvement with Lyoness - a key member of the company called 'MyShoppingGenie', which offered an 'amazing product', which would save the average consumer a considerable amount of money on everyday retail purchases by automatically comparing the prices for a product or service on numerous websites (sounds familiar, doesn't it?). 'Genius' it was, yet not for the thousands of people who had invested their money in (the 'distribution' of) the 'product'. Shortly after launching the product in Europe, the offices closed in May 2012. Just FYI, rumour has it that the company and its instigators have relaunched the racket under a new name: 'Shopping Sherlock'. 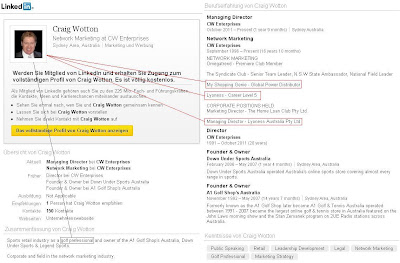 Anyway, like Mr Wagner, Mr Wotton was not unfamiliar with this type of scam and how it is played out before he joined Lyoness. On his website, he presents himself as a successful 'Network Marketing' coach, yet considering the 'business opportunities' he has been peddling, that may be a bit too much of self-commendation.

Unlike Mr Wagner, who has openly admitted that what he was peddling was a pyramid scheme (albeit to strengthen his case against Lyoness concerning hundreds of thousands of dollars in commissions), Mr Wotton keeps carrying out the message that this type of system is the way to achieve 'financial freedom'. Given his unfortunate history with 'picking the right opportunities', we would recommend people to think twice before doing business with this man. Also, we would like to advise Mr Wotton to make a more thought-out pick next time.

Nevertheless, it does tell us something that the former managing directors are publicly outing Lyoness for the scam it is on Austrian national television, the Internet and through founding a victims' organisation and the pyramid seems to crumble faster and faster. We at the Complaint Centre are very curious as to whether the revitalisation seminar currently held in Austria will have the desired effects and will suddenly make Lyoness a legitimate, ethical, honest business opportunity with solely happy and satisfied followers. We doubt it.

If you have been duped by this racket, please do not hesitate to contact us or Plattform Lyoness. Also, share this message!